Before we talk about the here and now, let’s revisit one of the more absurd seasons in Bulls history and quickly look at reviews for each player from 2018-19.

Lauri Markkanen – Put on 20 lbs of muscle, everyone made lame Drago jokes, missed the beginning of the year, had an insane February averaging 26 ppg and 12 rpg, fell off at the end and questions remain on how good he actually is.    In 52 games, he still averaged 19 and 9 on a 43/36/87 split.  He’s not a plus defender or passer and needs to be more efficient in his scoring this season.

Zach LaVine – Came out hot, scored efficiently until he didn’t. Defense was atrocious but he did indeed make strides as a decision maker and got to the rim at will. LaVine set career highs in ppg (23.7), fta (6), assists (4.5), rebounds (4.7) and achieved career lows in defensive and situational basketball intelligence. One of the more divisive players in Chicago sports.  He showed some serious flashes but he’s Devin Booker before there was Devin Booker.  The question remains (as dumb as this may sound), is he a winning NBA player?  His athleticism seems to be back to normal which was a concern.

Jabari Parker – kill me slowly by maggots eating my eyes out and then light my eyeless corpse on fire and thrown into the deepest depths of the hellish Black Sea to be ripped apart by the producers of the Masked Singer. #2 most Hated Bull of all time. (Cameron Payne is #1 and #3)

Kris Dunn – Finally showed us what we already knew. He is not a starting point guard in the NBA. Not only did his shooting, passing, decision making, finishing suck, but he also proved that his defense was smoke and mirrors.  He would often sell out and gamble on steals only to give up a wide open backdoor layup.

Wendell Carter JR – Quickly became a fan favorite by his defensive intelligence, feel for the game, work ethic and reactions to Jabari Parker. His season was cut short due to injury but he looks a lot more like Al Horford than Tony Battie.

Denzel Valentine – Uglier and less athletic than ever.  He missed the entire year and is our main backup wing (gulp).

Bobby Portis – Same ol Bobby! Could score, never looks to pass, can barely dunk, and gets out bullied by anyone not named Niko Mirotic. He tuned down a 4 year deal from the bulls before the season and THANK GOD

Otto Porter Jr. – Lionle Ritchie twin, superior 3 point threat and surprised Bulls fans with his all around play.   The team played much better once he first game on board via trade and despite his albatross contract, he brought a much needed level of stability to the SF position.  One of the very few bright spots of the year.

Ryan Arcidiacano:  Grit Romney did what he did and got rewarded with a 3 year 9 mil contract that no one else would have offered him.  Impressive actually.

Antonio Blakeney (recently waived) –Chucker Carlson was trash and relied on the Gleague to inflate his scoring prowess.

Justin Holiday – I wish him and Jrue could have done a freaky Friday.

Cristiano Felicio:  Is below a picture of the Bulls $8 million backup center or a large child learning the proper diving form?

Walt Lemon Jr – When life gives you Lemon jr’s, you sign Jakarr Sampson and call it a losing season.

Robin Lopez- A consummate pro and notorious mascot bully, Robin got some serious run last year thanks to Boylen’s old school offensive game plan.  Lopez has always been a great teammate and veteran presence on a team that desperately needed one.  He will end up having a fine Bulls career and the most useful part of the Derrick Rose trade….go figure.  (But GarPax thought Jerian Grant was a lottery pick!) 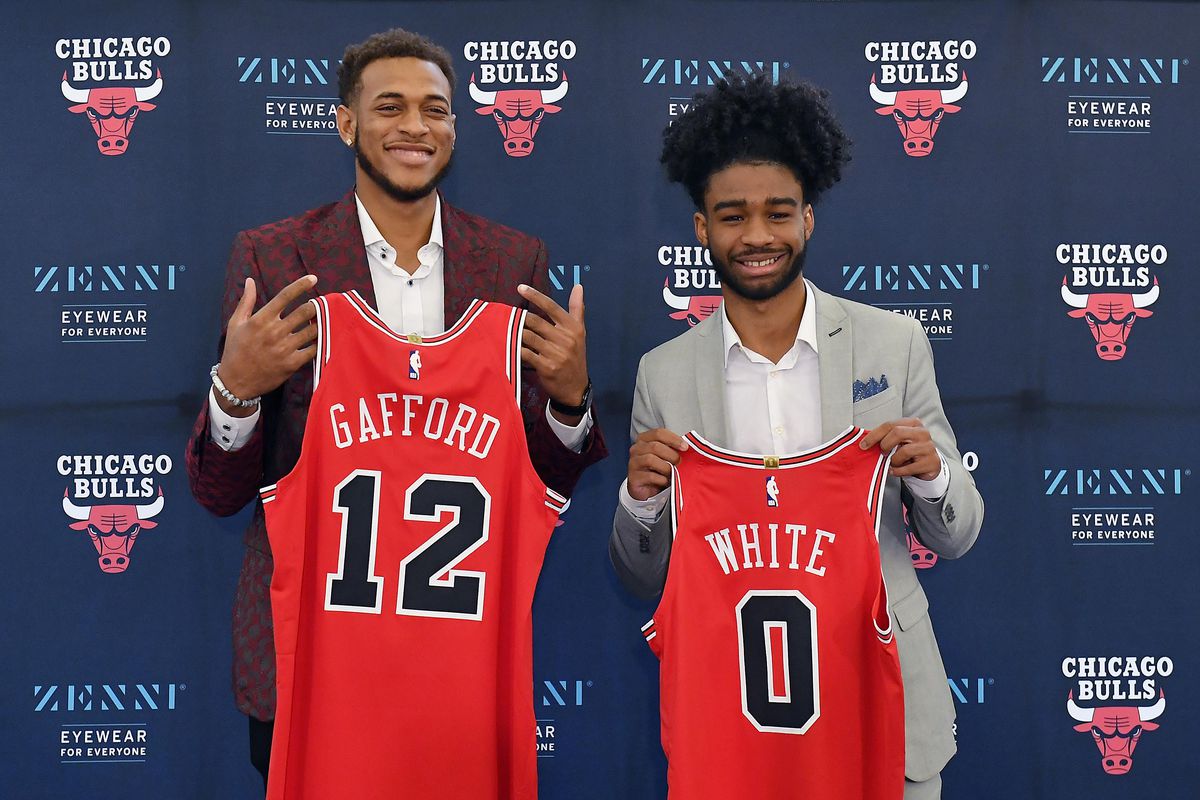 The 2019/20 Chicago Bulls off-season began with a bit of a disappointment as the Bulls secured the #7 pick (despite 4th worst record) for the 3RD STRAIGHT YEAR!  The Bulls got lucky (TBD) as the Phoenix Suns gonna Sun and made weird trades that impacted who was available at 7.  The Bulls were ecstatic as 19 year old UNC point guard Coby White fell into their laps.   White has great size at 6’5 (but has an oddly small T-Rex wingspan).  He’s immediately one of the quickest guards in the NBA and is clearly still learning the position.  Turnovers, decision making, consistency in his shot (already a solid spot up shooter but STRUGGLED in Summer League).  The Bulls will need to be patient with him but he did show some of his talent in Vegas.

The Bulls also selected a rim running big in the 2nd round in Arkansas’s Daniel Gafford.  He surprised many in Summer League play by being a pogo stick on the court who finished a lot of alley oops and a handful of blocks.  He was active, energetic with a really quick bounce.  He will always be limited (no semblance of a jump shot or playmaking ability) but is a legit athlete which the Bulls lack (see Denzel Valentine).

The Bulls also signed Adam Way Down in Mokoka to a 2 way contract.  He comes from somewhere….

The Bulls had a safe but productive draft and now needed to hit in free agency if they actually wanted to be a competent basketball team.  The Bulls needed point guard depth, wing depth, and just any veteran with a basketball IQ.

Shockingly, the Bulls made some very sound offseason additions….

(blink if you are being held hostage)

The Bulls didn’t get it all right though.  Jim Boylen was extended and the Bulls didn’t decide to do the prudent responsible task of having a coaching search in any way.  For or worse, Jim Boylen is man.  The Bulls did bring in some actual coaches however though.  To breathe life and modern day practices into the offense, the Bulls hired Chris Fleming from Brooklyn as well as big man whisperer Roy Rogers from Houston (credited with helping Clint Capela)

The Bulls also failed to resolve the Kris Dunn situation and might have a delicate situation on their hands with 4 poing guards on the roster.  It’s certainly possible that the Bulls move Tomas Satoransky around multiple positions and ease Coby White into the rotation (while also hopelessly trying to boost Dunn’s trade value).  The Bulls would ideally trade Dunn to fill the other major hole on the roster…..wing depth.  Beyond LaVine and Porter Jr, the Bulls are thin.  Chandler Hutchinson is both hurt AND not an NBA player and Denzel Valentine isn’t exactly reliable after missing all of last year.  The Bulls may end up signing a veteran such as Iman Shumpert to provide some depth.

Goals and Expectations for the Year

Bulls brass finally came out and said the word “playoffs.”  The 8 seed is a lofty but appropriate goal for this team (The Eastern conference is once again the weaker of the two).  In year 3 of the official rebuild, it’s time for Lauri and LaVine to make the jump to All Star level player.  The Bulls need to move into the top 15 for pace if they have any chance to have a winning season.  A full season of WCJ, Otto, Thad, and Sato should allow them to at least be a top 20 defense (baby steps).  Part of the Bulls fate will rely on Boylen and how he develops his young players and adjusts his offensive and defensive schemes.  That is terrifying.  But there is some reason for optimism as a Bulls fan and this team is much improved from last year.  A weak schedule to start could help a young Bulls team get some early wins and confidence.  The Bulls finally had a smart off-season and its time to stop rebulding and start competing.

I’ll be here all year folks (I’m Canadian now though), so check back for Bulls coverage all year!